The Amberjack Wants to Challenge You This Spring Break 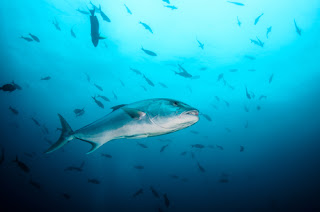 The amberjack often goes by the acronym of AJ and it isn’t exactly known for being one of the friendlier fish in the ocean when Miami deep sea fishing. You can think of it as being related in demeanor to the barracuda. It can be found in the colder parts of the Pacific and Atlantic Oceans. Although it’s become known by its common name, amberjack, the name could be thought of as the singular name that refers to the broad types of amberjack found throughout the world, which also include others like the lesser amberjacks, banded rudderfish, Yellowtail, or the Almaco jack, to name a few.

Greater amberjacks are the biggest of the numerous amberjack species, as their name suggests. They are distinguished by black bands that run from the nose to the dorsal fins and the absence of scutes. These fish, capable of reaching heft weights of around forty pounds, prefer to hang out near sea debris or reefs.

While lesser amberjacks don’t boast the same size as the greater amberjacks, their eyes have a larger appearance and their bodies also happen to be deeper. Lesser amberjack can be identified by its olive-green to brownish-black coloration and silver sides. These amberjacks, despite their small size, are noted for their savage predatory abilities, with crustaceans and squid being some of the food they like to munch on.

Amberjacks have gained a reputation among anglers for their ability to show even the nest anglers that they are not a fish to be taken lightly and will not be caught so easily. Should an inexperienced angler attempt to capture one of these hostile sea dwellers, it’s not all that uncommon for the amberjack to emerge victorious when the line breaks.