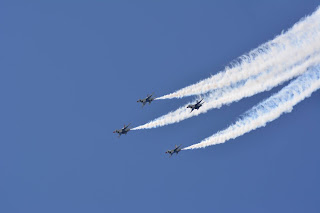 After a brief hiatus brought on by COVID-19, the Hyundai Air & Sea show has returned to Miami Beach! This year, catch the ”greatest show above the earth” from May 29-30, right on Miami Beach. As most people watch from the public beaches or their homes, admission is free, while VIP admission starts at $40, which will get you access to the Beach Club at Show center, with a reserved beach spot and many other amenities.

The event showcases the strength and ingenuity of the planes and other vehicles in the U.S. Military. The show serves as a national salute to the heroes of the United States Military and the brave individuals in the U.S. Army, Navy, Air Force, Marine Corps, the Coast Guard, and first responders. At Lummus Park on Ocean Drive, catch motorsport demos, watersport shows, and a military display.

Demonstrations and fly-bys will be brought to you by the U.S. Air Force, the U.S. Army, the U.S. Coast Guard, and the British Army Red Devils Parachute Regiment. All air events are scheduled for both May 29 and 30 from 12 pm to 4 pm. All events on the water will take place on May 39, and 30 from 11 am to 12 pm.

An interactive display will be available to the public at the Monster Energy Action Zone and Display Village at Lummus Park. The display will have flight and navigation simulators, tactical training equipment, rifle range simulators, and more! You can catch the display on both days of the show from 10 am to 6 pm.

While you’re in Miami checking out the Hyundai Air & Sea show, don’t forget to plan a Miami deep sea fishing trip! THERAPY-IV has boats that set out daily to catch all the best of the Atlantic ocean, including Marlin fishing in Miami Beach. Check out more about us online!

Posted by Captain Stan at 2:05 PM No comments: 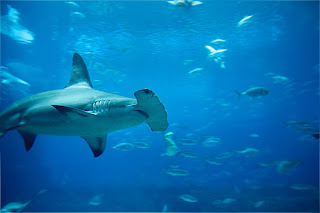 You can find the sharks offshore between latitudes of 45 degrees north and 45 degrees south. These sharks are loners and have been known to travel alone over 750 miles during migration. They can swim quite deep, reaching depths as low as 980 feet, but mostly hang out in depths of around 260 feet.

The official world record of a Hammerhead catch was in 2006 off the coast of Florida, weighing 1280 pounds and reaching lengths of 14 feet!

When Miami fishing you can be sure that you will be safe from an attack. Hammerhead sharks don't typically attack people since they prefer marine life. Most Hammerhead attacks have later been found to be a recorded mistake for other species such as the great white, tiger, bill, and white tip oceanic sharks. In fact, there have only been 17 actual recorded hammerhead attacks, and all have been nonfatal.

There are legalities involved with fishing for hammerheads. It's illegal to fish for great, smooth, and scalloped hammerhead sharks in Florida. Scalloped Hammerheads are a protected species in the United States, the first and only Hammerhead to be marked as such.

Surviving the Summer Heat in Florida 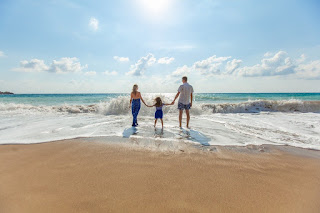 Summer is practically here, and with it, hotter temperatures. Miami is a great place to spend the summer because of its scenery and proximity to the beach. Still, a Florida summer is unlike any other! If you're an out-of-state resident from a location with a mild summer in town for Miami deep sea fishing, you're in for a surprise! Any Florida resident will tell you, the summers here are hot and humid.

The first and most important thing to do is stay hydrated. On a regular day, you need six eight-ounce servings of water, but you'll need even more when you are out on the water fishing. The signs of dehydration include confusion, dizziness, dry mouth, and headaches, and while you may not ever get dehydrated, knowing the signs are essential in preventing major problems. Avoid caffeine and alcohol before and after going out in the sun all day as it can dehydrate you.

Sunscreen is a vital piece of any summer activity. We have more sunny days than most, so you will need lots of it! Experts recommend that you reapply every two hours and use one with a broad spectrum SPF of at least 15. This will give you a higher level of protection against the UV rays that cause sunburn and damage your skin long term.

Above all else, listen to your body and make sure you are properly preparing and taking care of it for a day in the sun. You'll keep the fun in your sunny getaway and stay away from sun sickness!

Posted by Captain Stan at 8:10 AM No comments:

How to Catch Barracuda Fish 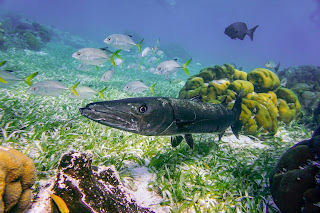 You can find the Great Barracuda fish in warm, tropical waters, so Miami is a great place to catch them. When they are young, they live in shallow bays and near the shore, but they live among reefs, much farther away from the shoreline as they grow larger.

These fish can grow up to around 50 pounds - the biggest one spotted in Florida was recorded at 67 pounds, and the world record is 85 pounds! The Great Barracuda is extremely fast and can travel short distances in a short amount of time, and have jagged teeth that you should watch out for.

To catch this fish, you will need saltwater spinning reels at least seven inches long, which can be used with artificial lures. If trolling, you can use shorter rods. Make sure you have a wire leader so that their teeth can't cut off the line.

Whatever bait or lure you use, make sure that it also can't get cut by their teeth. Using bait like sardines and mackerel will draw the Great Barracuda in. They will usually bite the tail off the bait first and return for the rest, so be patient and don't pull back too soon, or you might lose your catch. Typically, you can catch them when they are by themselves.

Interested in barracuda or marlin fishing in Miami Beach? Come aboard the Therapy-IV! We set sail daily and have plenty of opportunities for barracuda fishing and Miami deep sea fishing. Call us at 305.945.1578 or visit us online to book an appointment.

Posted by Captain Stan at 4:24 PM No comments: