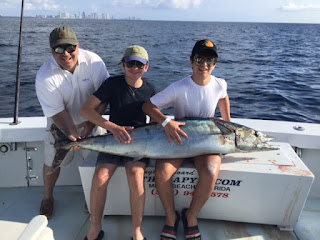 Wahoos - one of the great fish that is local to Miami. These fish are fast-growing and can get pretty big, reaching lengths between 2.8 feet (males) and 3.3 feet (females). You can find them in the Gulf stream or inshore of the Gulf Stream just below the surface. Wahoos are pretty solitary. They usually travel in groups of two to three or solo. So, when we get a great catch when Miami deep sea fishing, it’s always a good day!

Wahoos can also be referred to as the Pacific Kingfish Ono, which means delicious in Hawaiin. They’re pelagic fish that can be found in many tropical and subtropical waters, most famously in the Atlantic Indian and Pacific Oceans. They’re closely related to the King Mackerel.

These fish are pretty slender and are strong and fast, even being rumored to be the fastest swimming fish in the ocean. They have beautiful blue and silver stripes, which can be most visible immediately upon catching. Beware! Wahoos are another fish with razor-sharp teeth.

They’re also skilled fighting fish since they are known for their long runs. They fight near the water’s surface but can go deeper. They fight differently when hooked when trolling at deeper depths when you compare them to live bait fishing. When hooked, they shake their heads vigorously while staying just below the surface.

Catching fish like the Wahoo when Marlin fishing in Miami Beach isn’t such an easy task when they’re skilled fighters! We’re proud of these folks for reeling in a great catch. It can be quite a good feeling to catch a fish that’s so fast, making deep sea fishing one of the most entertaining and enjoyable parts of any Miami staycation, getaway, or weekend adventure.