How Dangerous Are Mako Sharks? 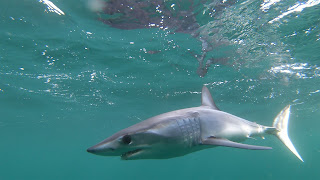 You may not have heard of the Mako Shark since its close relative, the great white shark, typically steals the spotlight. Often referred to as the "peregrine falcon of sharks," these hunters can reach speeds over 60 miles per hour and may be the most agile in the ocean.

The name mako is derived from the Maori name for shark. The mako shark has long been the subject of Maori myths and are highly prized for their sharp teeth. There are two species of mako shark, shortfin and longfin. Shortfin Mako Shark encounters are more common, and they can be found throughout the world in offshore temperate/tropical zones (shortfin) or Gulf Stream warmer waters (longfin).

This is a giant mackerel shark, and can reach lengths of 4 meters, and typically live to be 30 years old. The world record for the highest mako shark rod and reel is 1,300 pounds off the coast of North Carolina!

The speed of the shortfin mako attracts lots of attention for fishermen when Miami Deep Sea Fishing. They are deadly hunters but can prove to be most dangerous to humans when lifting them into boats. It's recorded that shortfin mako sharks are only the cause behind one out of nine fatal shark attacks.

When Miami fishing in Florida, shortfin mako fishing limits include one shark limit per person per day and two sharks per vessel limit (the maximum number of sharks that are allowed to be retained from a vessel is two even if there are more than two fishers on the boat.) The maximum size limit is 83 inches (fork length.)