How to Charter a Fishing Boat with THERAPY-IV 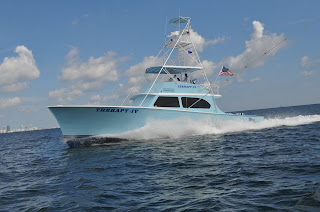 Knowing which boat to charter for Miami deep sea fishing adventures can be a bit tricky. There are many things to consider when deciding that you will go with, and your decision can impact your fishing trip. Knowing what to look for and how you will want to spend your day will help you decide what is right for you.

Will you want a shared or private experience? THERAPY-IV offers both, especially when marlin fishing in Miami Beach. We are the only charter boat in Miami that allows fill-in services, which is when a party of less than six, we will fill in the rest of the seats at no extra cost to you, so we always have a full boat! We also offer private, full-day charters. If you want to know more about these, just give us a call!

If you’re looking to book an event, corporate days at sea and large group charters are available to you. We can coordinate outings with multiple boats, always guaranteed for a good time. Our boats are also wheelchair accessible.

Our charters are filled with rods, reels, bait, tackle, and a Florida Fishing License - it’s all included in the trip! THERAPY-IV fleets have been running fully licensed charters for over 40 years. Whatever you want to accomplish out on the sea, we can help you get there.

Posted by Captain Stan at 10:45 AM No comments: 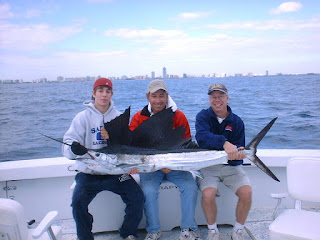 Revered as the fastest fish in the ocean, the sailfish is a large and lively catch - a highly sought-after treasure of the sea. These fish can reach speeds of 68 miles per hour and can live up to four years. Typically, they weigh anywhere from 120 to 220 pounds and reach lengths of 5.7 to 11 feet! There are two main types of sailfish: the Atlantic and Ino-Pacific regions, but they are always found in warm and temperate waters.

The sailfish are blue and grey with white underbellies and get their name from the dorsal fin that runs almost the entire length of their body. Their dorsal fin is quite a bit larger than the thickness of their bodies. Sailfish are primarily sought after for recreation and not commonly eaten. They offer up quite a fight, leaping and jumping about.

There is a large population of sailfish, and currently, they aren't under any special statuses or levels of protection. In fact, records every year are often broken in Florida from sailfish game fishing! The species is abundant and healthy where Miami deep sea fishing occurs.

Sailfish season for Florida depends on the weather and any cold fronts that could appear. The warmer it is, the larger the fish population will be—however, sailfish when marlin fishing in Miami Beach can be found year-round. Many people love catching sailfish in the summer, but they are a great game to catch in the winter months. If you've got your eye on the sailfish, check us out year-round for a great catch!

Posted by Captain Stan at 4:10 PM No comments:

What's So Special About the Dolphin Fish? 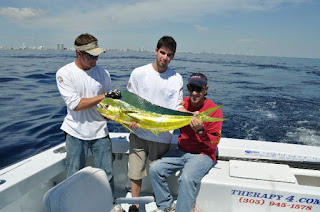 The dolphin fish has been a legendary prize in Miami beach for decades. Known as the dolphin fish, mahi-mahi, or dorado, they are most commonly referred to as the mahi-mahi, a name derived from Polynesian, which means "strong." Don't be fooled - the mahi-mahi, or dolphin fish, look nothing like dolphins and are in no way related to dolphins. So, the next time someone says they're fishing for dolphins (commonly used as yet another nickname for this fish), you don't have to be alarmed - they're really on the hunt for some quality mahi-mahi.

The dolphin fish are most commonly found in the pacific ocean in the central and north American regions. However, they can reside in tropical/subtropical regions across the world, much like where you can go Miami deep sea fishing. They are present all year, but the best time to score a catch is in the warm summer months. They typically live for five years and grow to an average of 15 pounds.

The Florida Wildlife Commission states that for Miami Fishing, there is a size limit of 20 inches, but there is a ten fish per person or 60 per vessel, whichever amounts to the least amount of fish. Gear requirements are just a hook and line for spearing.

The dolphinfish is a popular dish for fish lovers worldwide. They are one of the lower-risk alternatives for mercury exposure and are generally low fat, coming in at just 1%. Their flavor is often compared to sea bass. If you want to try something new, mahi-mahi is the way to go.

Posted by Captain Stan at 12:43 PM No comments:

All About the Snapper 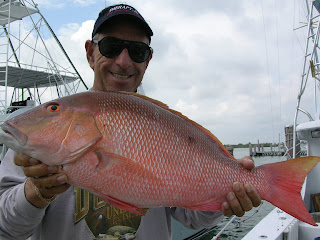 The red snapper is one of the most popular catches in the Gulf of Mexico and South Atlantic regions, especially in Southern Florida. There are a few snappers; the dog snapper, emperor snapper, red snappers, the gray/mangrove snapper, the red and white Indo-Pacific snapper, and the yellowtail snapper. These carnivorous fish eat other fish and crustaceans, have giant mouths with sharp teeth, elongated bodies, and can reach up to 3 feet long. Some have even been reported to reach 50 pounds!

Red snappers are some of the most valuable fish in the United States and are a hot commodity for commercial fishers. Unfortunately, they have been highly overfished in the Gulf region, having sanctions placed on their species to manage their conditions and promote population growth.

This fish also has different sanctions based on the region you are fishing in. Miami deep sea fishing sits in the Atlantic region (state waters are from shore to 3 miles into the ocean). Federal Atlantic regulations start snapper season on July 9. However, since the snapper season is announced and changed by NOAA each year to preserve the species, this year, the season will only last until July 11 for recreational fishing.

2021 is under a limited open season, meaning there is only a total annual catch limit of 42,510, with recreational catches only able to amount to up to 29,656 fish. The bag limit for recreational Miami fishing is one red snapper per person per day for both private and charter boat vessels.

Florida regulations mandate that whether you are fishing in the Gulf or Atlantic regions, all those who intend to fish for red snappers must get a State Reef Fish Angler designation.

Posted by Captain Stan at 8:40 AM No comments: